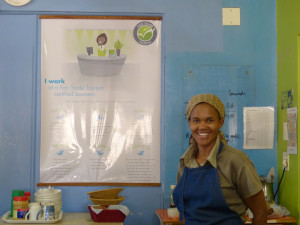 Ubuntu Experiences member Three Tree Hill Lodge in Kwa Zulu Natal is the perfect employer and confirms that happy staff means happy guests. The staff are proud to be working for a Fair Trade Tourism employer and know exactly what it means to them.

Empowerment is one of the many outstanding ethics at Three Trees, which is Fair Trade Tourism certified. “We take good care of our staff,” says Simon Blackburn who owns and runs the lodge with his wife Cheryl. “Our people are our biggest asset, and if they are happy, then our guests are happy, so we do everything we can to encourage staff to be entrepreneurial and further their careers with us,” he adds. 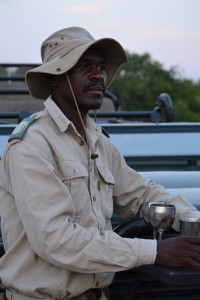 Umlani Bushcamp has great staff but ranger Elvis really is something special. He’ll make sure you see the Big 5. My family all loved him too. My sister even took this majestic photo of King Elvis but to get a better idea of the lengths he will go to, read this great blog from a very happy guest.

‘Umlani brings me close to nature and close to the earth. Their simple and non-intrusive camp inspires me to take another look at what I can change in my life to be kinder to the environment. If they can do it in the middle of the bush, why shouldn’t I do it in the city? But most importantly, being at Umlani reminds me to slow down and appreciate the small things in life; the sun breaking the horizon, the sound of birds waking up, the beauty of Africa, and the chance to spend time with loved ones without letting life distract the encounter.’

Katarina Mancama has her own blog called My Slow Journey but also contributes to The Good Holiday blog. She describes the guest experience at Umlani Bushcamp perfectly. She also takes great photographs! 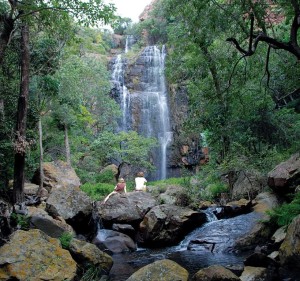 Katarina Mancama lives in South Africa and has a great blog on responsible travel called My Slow Journey. She went to Morning Sun Nature Reserve in Limpopo and brought her hiking boots. Exploring on foot is as slow as you can get of course but it’s worth it while staying at Mashovhela Lodge. 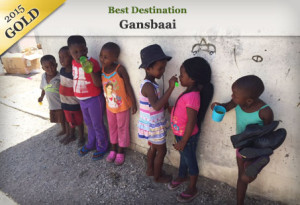 The Gansbaai is like an oyster that the local fishermen have opened only to discover a pearl inside – but that they then go on to share with all the world. Because Gansbaai, a town in the Overberg region, Western Cape, South Africa has transformed itself from fishing village to one of South Africa’s most exciting, and community led adventure hubs, a process that has been led by the Gansbaai Tourism Association which is one of South Africa’s most proactive and passionate clusters of tourism businesses, from fishermen to fynbos conservationists. Because at Responsible Travel we know that responsible destinations don’t just happen. People make them happen.

The wholly committed members of the Gansbaai Tourism Association have been putting this coastal community and biodiverse natural heritage on the map for the last twenty years. With a small fishing village at its core, the Gansbaai group keeps growing and growing. Many of the tourism business members are Fair Trade Tourism certified, and all are committed to protecting the natural environment, preserving heritage, improving the quality of life of local people, and strengthening the local economy. Shark cage diving, kayaking, responsible whale watching, horse riding, fynbos safaris, and hiking are just a few of the holidays experiences to be had in this area that used to be just a quiet fishing village.

Read more about the award here.

For some great Ubuntu Experiences in the Gansbaai area check Marine Dynamics for diving with Great White Sharks, Dyer Island Cruises for whale watching and International Marine Volunteers for a holistic responsible volunteer or research experience.

New ABTA research released during World Travel Market in London reveals that travel companies with a good environmental record are increasingly gaining a commercial advantage, with three out of ten consumers (29%) saying they would be likely to choose one company over another based on their environmental record, up from one in five (19%) in 2011.

The survey also reveals a steady increase in the number of people prepared to pay more for a holiday with a company based on a better environmental and social record. A quarter of people (25%) said they would be prepared to do so, up from one in five (19%) in 2011, after having dropped to only 14% in 2012.

There is growing sentiment amongst consumers that it is the travel company’s responsibility to be environmentally responsible. Over four in ten consumers (45%) agree with this, up from a third (31%) in 2011. Only one in ten (13%) think this is not the case. The majority of consumers (62%), also believe that travel companies should ensure that their holidays help the environment, with only 5% disagreeing.

One in four consumers (40%) believe that holidays should have an environmental and social rating, such as provided by the Travelife scheme, with only 16% disagreeing.

Three Tree Hill Lodge has invested heavily in social responsibility programmes. All staff receive sustainability induction training where they learn about good environmental practices, which apply not only to reducing their environmental impact in the workplace, but can also be applied in their homes and communities.  Staff are encouraged to come up with ideas on improving the business as well as projects in the community.

Employment opportunities are given to the local community as a first priority and subsequent training not only includes job-related skills training but also includes personal development such as; personal budgeting/savings, relationships and conflict resolution, and wellness training including HIV/AIDS through Life Line, conducted in Zulu.

Three Trees is actively involved in the local community. The lodge fundraises through the Three Tree Social Community Fund, R20 per guest per night is donated to this fund to benefit local schools and provide mentorship to entrepreneurs in the village.