South Africa and the Timbavati have recently seen a heated debate over possible trophy hunting in the Timbavati following an article by Don Pinnock. Both the reserve and the lodge owners have now issued statements as they feel the article was unfair, lacked context and is potentially damaging to the great conservation work and tourism activity that takes place in the area.

The Timbavati management is aware of the article produced by Don Pinnock of Conservation Action Trust. We are disappointed that the presentation of this story is not in line with the facts and information that were openly provided to the Conservation Action Trust. We have offered to host Mr Pinnock at the Timbavati to show him what we do and why our strategy has been so successful to date, an offer which he ignored.

We are distressed that Mr Pinnock seems confused about our explanation that the lodges within the Timbavati play no role in the management of the reserve and in many cases are independently owned tenants of the reserve.

The heading of his article and the vague wording have led to unfortunate social media debate and aggression towards the lodges within the reserve, which we feel is unfair, and we call on all tourists and travel trade members to exercise caution and discretion when interpreting Mr Pinnock’s article.

We would like to make reference to two glaring factual inaccuracies in Mr Pinnock’s article:

The reference to the possibility of a leopard being hunted in the Timbavati is also incorrect. It was confirmed in correspondence with Mr. Pinnock that no leopard hunts will take place whilst a nation-wide moratorium is in place.

In addition, the numbers and statistics presented in the article are not pertinent to the Timbavati, and do not represent the figures offered by Timbavati to Mr Pinnock. Our understanding is that his figures relate to an area almost 4 times the size of the Timbavati, including 3 other Private Nature Reserves.

We are proudly regarded as one of Africa’s conservation success stories by both local and international authorities, with our wildlife population numbers increasing continuously, and particularly elephant population numbers, which have increased by over 400% in the last 20 years. We are extremely proud that our hardworking team has managed to curtail rhino poaching in the face of a rising wildlife crime pandemic. We have had no poaching incidents on Timbavati in the last 18 months.

In addition to this, we enjoy a truly productive, co-operative relationship with all of our neighbouring reserves, a relationship which we value highly. 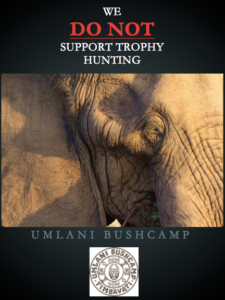 All the lodges oppose the hunting naturally but we are the ones who get punished for something we do not support and the hunting lobby wins all the way. It is a matter of time before the hunting is over and Timbavati will need to find other ways of generating income for conservation efforts.

The Don Pinnock article misrepresented some facts, the numbers quoted in the article are for the entire APNR like Timbavati , Klaserie , Umbabate , Balule agreed to by Kruger National Park. The campaign has been directed specifically at Timbavati lodges? All other lodges in Klaserie , Balule etc are also in the same boat as us.

There has been selective hunting and tourism in Timbavati for years, it’s still the same place nothing has changed other than orchestrated media campaign organised by “Conservation Action Trust” whose trustees seem to have a vested interest in destroying the non-hunting photographic tourism lodges in Timbavati .

All the lodges have put out a joint statement as well which you can find here.